Mahalo Aloha-Hawaii.com for this information 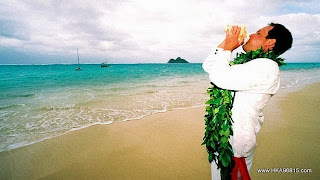 Lei reserved for memorable occasions
In Hawaii, the placing of a lei over the head and around the shoulders of a person exemplifies the bestowing of honor and respect, and also the spirit of aloha. According to Hawaiian tradition, the maile was the lei for people of all classes and all occasions. The maile is a long lasting lei and probably the oldest and most popular material used in leis by the early Hawaiians. It is an open-ended horseshoe fashion lei made of the spicy scented green maile stems and leaves.
The native Hawaiian vine, with shiny fragrant leaves, is a member of the periwinkle family, and is also associated with Laka, the goddess of Hula. Maile along with other plants of the native forest were considered sacred to Laka, and were offered at her altar at hula dance practices and shows. In ancient Hawaii, the maile was also considered a peace offering in the field of battle. 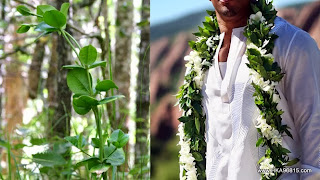 The maile is most often reserved for memorable occasions. It is known to many as the “lei of royalty,” given to signify respect and honor. The maile is very popular at weddings, graduations and especially proms. On the US mainland, young men usually receive a boutonniere from their prom dates. In Hawaii, they are presented with a maile lei. Wedding leis are a Hawaiian wedding tradition. The maile is the most traditional wedding lei, as it was used by the Kahuna (Hawaiian priest) in old Hawaii to bind the hands of the bride and groom, symbolizing their commitment to each other.


The maile lei can also be used for other purposes. Some people dry the lei and use it to scent their drawers, closets, tapa (bark cloth), etc. Lei stands entwine the maile lei with a variety of flowers such as pikake, ilima or mokihana berries.
The maile lei is noted for its rarity and considered by many to be the finest of all leis. Prices range from $30 and up. So place your orders early! 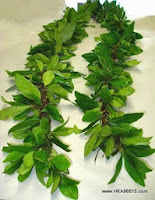 Alyxia oliviformis, known as Maile (pronounced MY-lĕ) in Hawaiian, is a species of flowering plant in the dogbane family, Apocynaceae, that is native to Hawaii. It grows as either a twining liana, scandent shrub, or small erect shrub, and is one of the few vines that are endemic to the islands. The scientific binomial means "chain resembling olive" in Latin. The leaves are usually ternate, sometimes opposite, and can have both types on the same stem.[2] Flowers are quite inconspicuous and have a sweet and light fragrance of honey. The bark of the vine is most fragrant and exudes a slightly sticky, milky sap when punctured which is characteristic of the Apocynaceae family. The entire a plant contains coumarin, a sweet-smelling compound that is also present in vanilla grass (Anthoxanthum odoratum), woodruff (Galium odoratum) and mullein (Verbascum spp.).[3] Fruit are oval and dark purple when ripe. Maile is a morphologically variable plant and the Hawaiian names reflect this (see Ethnobotany section).

Maile can occur in most types of vegetation from 50–2000 m on all of the main Hawaiian Islands, however it is believed that both Kahoʻolawe and Niʻihau likely had populations of maile before large-scale disturbances occurred. Lowland wet forestsoccur from 100–1200 m elevation on the main Hawaiian islands and are prime habitat with around 1500–5000 mm of rainfall usually. Montane mesic and wet communities are also where maile occurs.[2]

Several ʻōlelo noʻeau from the Hilo and Puna districts on Hawaiʻi Island paint a wonderfully fragrant picture of Puna and Panaʻewa. Ka makani hali ʻala o Puna, the fragrance-bearing wind of Puna; Lei Hanakahi i ke ʻala me ke onaona o Panaʻewa, Hanakahi is adorned with the fragrance and perfume of Panaʻewa.[5] These were both places that had a moist climate suitable for maile and other fragrant ferns, as well as the famous hala (Pandanus tectorius) from Puna. The phrase Puna paia ʻala, fragrant walls of Puna, gives reference to the hīnano blossom which was famously hung inside hale of that district to scent the house. People travelled to both Puna and Panaʻewa in order to pick maile, hence those areas being remembered as fragrant.

Mrs. Pukui tells a story from Kaʻū on Hawaiʻi Island of a beautiful young woman, Mōlī, whose father will let none other than a fisherman marry her (a good fisherman is well liked and prosperous because of the food he catches; it is also a sign of a much desired hard-working man). A certain worthless fisherman who tricked Mōlī's father by rubbing fish guts (which were thrown out by others) on himself took her hand in marriage and did no work afterwards. Driven to desperation, Mōlī decorated herself with a beautiful lei of ginger (Zingiber zerumbet), fern and maile and threw herself over the cliffs at Waiʻahukini. It is said each year around the time of her death, Mōlī returns and when the wind blows, moaning and wailing can be heard. The maile fragrance of her lei can also be smelled and if anyone goes there wearing a maile lei, they will be knocked to the ground.[6]

Keaoua Kekuaokalani, a cousin to Liholiho (Kamehameha II), objected to the overturn of the kapu system and with supporters, they gathered together with weapons at the battle of Kuamoʻo in attempt to restore the kapu taken away. Hawaiians from the area where the battle took place hold that the fragrance of maile worn by the Kekuaokalani's warriors into battle can still be smelled.[7]

Maile is traditionally and still most popularly used in lei. The vines are prepared and twined together to make an open lei or if people prefer they can close it. In more rural areas it is typical for someone to pick their own maile if accessible, however because lei maile is so desirable, many floral shops carry these kinds of lei. It is one of the only endemic Hawaiian plants grown commercially for lei.[7] Commercial maile plantations[8] have become more common as some people feel that imported (non-Hawaiian) maile is not as fragrant as Hawaiian maile.

This plant was used medicinally to treat puho, puka puhi, kaupo, and na ʻeha moku kukonukonu e aʻe (other cuts). Maile kaluhea was mashed with ʻaukoʻi (Senna occidentalis) stalks, ʻahakea (Bobea spp.) and koa (Acacia koa) bark. After water is added to this mixture and heated, it is put on infected areas to clean.[9]

Lei maile are often worn by the groom, and also by the groom's men in weddings which is a lovely sight. For high school proms in Hawaiʻi, the boy is often given a lei maile. Birthdays, graduations, anniversaries and any celebration for that matter are all an occasion for lei maile, however many responsible stewards to the land understand there is not enough maile to go around for everyone. This ties back in to local maile plantations that have started up.[8]

Because maile is desirable for harvesting it is often incorporated into restoration plantings which can help bring the community into the conservation process.[10] One study looked the potential of planting native Hawaiian plants as an understory layer to reduce weedy seedlings from sprouting up and gaining hold again in a restored area. Maile, māmaki (Pipturus albidus) and palapalai (Microlepia strigosa) were the plants used.[11]

at 7:52 AM
Email ThisBlogThis!Share to TwitterShare to FacebookShare to Pinterest
Labels: Hawaii Plants
Location: Hawaii, USA