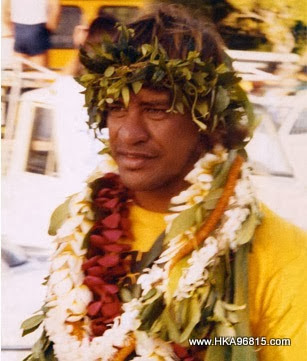 Eddie Aikau was the first official lifeguard at Waimea Bay, on Oahu's North Shore, and at the same time developed a reputation as one of the best big wave riders in the world. Partnering with his younger brother/lifeguard Clyde, the pair never lost a life on their watch. Eddie surfed every major swell to come through the North Shore from 1967 to 1978. He attained a rank of 12th in the world on the early IPS pro surfing rankings. His best contest result was a win in the 1977 Duke Kahanamoku Invitational Surfing Championship. In 1978, Aikau was among a handful selected to join the cultural expedition of the Polynesian voyaging canoe Hokule'a, which set sail from Magic Island, Oahu, bound for Tahiti, on March 16, 1978. Hokule'a soon encountered treacherous seas outside the Hawaiian Islands and the canoe capsized. After a wild night adrift, Aikau set off on his paddleboard on March 17 in search of help for his stranded crew members. He was never seen again. The ensuing search for Aikau was the largest air-sea search in Hawaii history.
Click here for more information
at 9:05 AM
Email ThisBlogThis!Share to TwitterShare to FacebookShare to Pinterest
Labels: Hawai'i Nei
Location: Waimea Bay, Hawaii 96712, USA