The Lele O Nā Manu exhibit is about the rich and diverse natural history of endemic Hawaiian forest birds, their preeminence in traditional Hawaiian culture, and the dire need for their conservation. 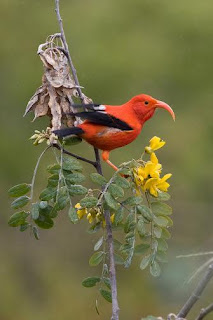 Hawaiʻi has been called the ‘Endangered Species Capital of the World’ and this is particularly true of its avifauna. There are more than 140 known unique endemic bird species in Hawaiʻi, over half of which have gone extinct since humans arrived on the islands and most of the rest of whom are endangered. Current threats include: habitat degradation by cattle, feral pigs, invasive plants, and real estate development, as well as predation by feral cats, rats, and mongooses.  Yet the greatest threat to the native birds is avian malaria, which is spread by mosquitos.  With the help of rising global temperatures, the disease carrying mosquitos will reach all evaluations in the archipelago by the end of the century and the highest elevations of Oʻahu and Kauaʻi in as little as 20 years, making extinction inevitable for several species with dangerously small populations and limited genetic diversity.