Over the vast, South Pacific Ocean came the double-hulled canoes, searching northward into an unknown sea. On these voyagining canoes were the Children of Tangaroa, Tane, Ti and Rongo. In search of new land, these Polynesian settlers, called Kanaka Maoli (The People), came upon a chain of islands. With them they brought various seeds, tubers and roots to plant in their new homeland, Hawai'i. 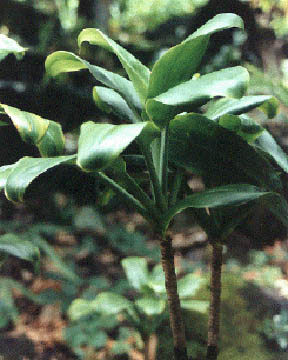 One of the introduced plants to Hawai'i by the early Polynesians was a tall, stalk with tightly clustered, green, oval and blade-shaped leaves. The leaf was about 4 inches wide and varied from 1 to 2 feet long. It was a fast growing woody plant that reached from 3 to 12 feet in height. The plant was Cordyline fruticosa. Known to the Hawaiians as Ki, it was a ti plant, a member of the lily family.
Ki was considered sacred to the Hawaiian god, Lono, and to the goddess of the hula, Laka. It was also an emblem of high rank and divine power. The kahili, in its early form, was a Ki stalk with its clustered foliage of glossy, green leaves at the top. The leaves were used by the kahuna priests in their ancient religious ceremonial rituals as protection to ward off evil spirits and to call in good.
There were many uses for the ti plant in old Hawai'i. The boiled roots were brewed into a potent liquor known as 'okolehao. The large, sweet starchy roots were baked and eaten as a dessert. This versatile plant also had many medicinal uses, either alone or as a wrapping for other herbs needing to be steamed or boiled. The ti leaves were wrapped around warm stones to serve as hot packs, used in poultices and applied to fevered brows. A drink from boiled green ti leaves were used to aid nerve and muscle relaxation. Steam from boiled young shoots and leaves made an effective decongestant. The pleasantly fragrant flowers were also used for asthma. Besides its use in healing practices, the large ti leaves became roof thatching, wrappings for cooking food, plates, cups, fishing lures on hukilau nets, woven into sandals, hula skirts, leis and rain capes.


How to Care for a Ti Plantby Charmayne Smith, Demand Media
Gardeners in warm climates can dress up patios and gardens with the colorful, tropical ti plant. Native to Southeast Asia and the Pacific, this warm-weather plant is commonly known as the Hawaiian ti and thrives in U.S. Department of Agriculture planting zones 10 through 12. This colorful plant produces long, glossy foliage that ranges in color from rich greens to deep purples, and even includes variegated patterns.
http://homeguides.sfgate.com/care-ti-plant-22654.html

at 10:20 AM
Email ThisBlogThis!Share to TwitterShare to FacebookShare to Pinterest
Labels: Hawaii Plants